J is for Joseph

I have to admit that I have a soft spot for Joseph, Technical Dream Coat and all! I am named after him, so I grew up listening to his story with rapt attention. Joseph’s story was always compelling to me because he was a beloved son who just didn’t know when to shut up. He had a tendency to put his foot in his mouth, even when he was saying good things, and he would go over the top and upset people. I’ve been that guy. Many times. Embarrassingly so.

Joseph’s story is filled with tragic circumstances, a cautionary tale that just because you do everything right that things don’t always work out the way you hoped or intended. Joseph was a straight arrow kind of guy who worked hard and had strong integrity and yet he continued to find himself in increasingly challenging situations. Those circumstances became a gauntlet that measured him and a vehicle by which he found himself in just the right place to save his family when famine struck the region and endangered all those he cared about. Instead of becoming bitter and jaded by his situation and the flagrant injustice of what had happened to him, Joseph saw the intention and direction his life was moving towards and saw what good he could be in the place he had ended up.

“When Joseph’s brothers saw that their father was dead, they said, ‘What if Joseph holds a grudge against us and pays us back for all the wrongs we did to him?’ So they sent word to Joseph, saying, ‘Your father left these instructions before he died: ‘This is what you are to say to Joseph: I ask you to forgive your brothers the sins and the wrongs they committed in treating you so badly.’ Now please forgive the sins of the servants of the God of your father.’ When their message came to him, Joseph wept. His brothers then came and threw themselves down before him. ‘We are your slaves,’ they said. But Joseph said to them, ‘Don’t be afraid. Am I in the place of God? You intended to harm me, but God intended it for good to accomplish what is now being done, the saving of many lives. So then, don’t be afraid. I will provide for you and your children.’ And he reassured them and spoke kindly to them.” (Genesis 50:15-21 NIV)

Adventure in roleplaying games tends to center around terrible things happening to the people playing the game and fighting against those circumstances. Many adventures or quests start by thrusting the players into incredibly unjust circumstances. Throwing players in prison and taking away their resources emphasizes just how unfair things can be. The Lord of the Rings starts by thrusting two poor hobbits into incredibly unfair circumstances, yet they prove to be just the ones who need to be there at the very end. There is something poetic and powerful about people being thrown into conditions well beyond their natural ability to deal and having to rise above. For some it means having your story take an unexpected detour. In Joseph’s life, his undesired detour meant life for his family and for the entire ancient Middle East. It’s a powerful narrative, could your circumstances be merely a piece of a deeper story that is still in the telling?

Hovering Over the Waters 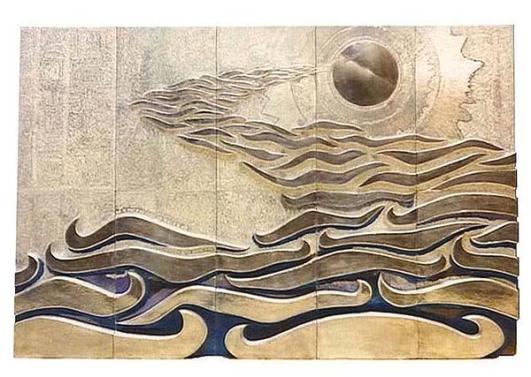 Campaign settings fascinate me. There is something about the way we frame and build and construct an entire world in an RPG that is incredibly satisfying. Even fleshing out and discovering the secret in-between places of an established published setting lends itself to some incredible gameplay. Playing within a campaign setting offers an opportunity to say something about the nature of the world and in many ways the setting is the character the GM brings to the table.

I’ve been inundated by amazing campaign setting ideas in the last couple of months. As I already wrote about before, I’ve got some campaign ideas I’ve been kicking around for some time now, but my direct inspiration for a seafaring island based campaign was Chris Perkins own Iomandra setting. I also got swept up in the work put into the 13th Age setting with the Icons and just how that defines the parts of the game with which the characters interact. Watching Mike Krahulik from Penny Arcade build up his Thornwatch setting followed by his own game system was inspiring. Then over at d20Monkey, Brian’s Karthun setting is shaping up to be a really cool change up from the cliche and static expectations of what a tabletop game looks like. Then on top of all that, I recently discovered Blade Raiders and the setting from that game is fleshed out and full of unique little nuggets that define what works and what is expected within a game.

All of these ideas and creativity are awesome to observe (and to partake in myself) and there is something inherently right in this simple act of world and story creation. There is something in us that longs to partake in the creative act and I think it is something God puts in us because it is part of who He is. In the beginning of Genesis before anything else happens in the story of God interacting with the world there is a simple description of what God was doing. “Now the earth was formless and empty, darkness was over the surfaces of the deep, and the Spirit of God was hovering over the waters.” It is in the context of this that God begins setting the bounds of existence and all that is comes to be.  Genesis also describes how in humanity, God does something special by creating mankind in the very image of God. I think  a specific part of that image is the creative impulse. We as people have a drive to take part in the same activity as the One who made us. It’s wired in. For me, building a campaign setting gives me this weird satisfaction almost like fatherhood. I think it is awesome that as gamers, we have an unexpected output of playing with the divine that I think many would miss. So am I playing god? Maybe a little bit, but I think He’d be more than cool with it.